I've heard some wrong words this week. Moreover, if it was from a foreigner in the profession, I would not write so long, be sure. We correct some misused phrases and words from time to time in the media production industry. Therefore, in this week's article, I will try to explain to you why the original phrase 'voice acting' should be 'microphone acting'. In the old saying, speaking of characters in movies and TV series, is it dubbing or dubbing? Dubbing of course. So why should the modern version of this be voice acting? Dubbing is the technical name for the process of respeaking the character. Why should the name of the profession be voice acting? We wonder why the definition of a microphone acting profession is not made while the profession is defined under the name of acting in front of the camera. They said, 'No, sir, the microphone is too technical, we said at least get a 'voice actor'. We decided this is it. 😊 There are so many misuses in the industry. Moreover, with these misuses, associations are formed and clubs are formed. These are inserted into the official literature of the state, the sector, without any research by foreign officials, and then they are treated as verses.

''The voice actor voices it. The dubbing artist speaks.

Now let's do some philosophy by going down to the roots of the words. We have told you the meanings of the voice-over and dubbing words in our previous articles. Dubbing; It is the technical name of the job of giving a voice to the brand, product and service. Profession is a voiceover artist. The person who performs the profession is called a voice actor. Dubbing; It means talking to a real character, actor (including himself), anime character. Dubbing is the technical name for this speech process. His profession is microphone acting. People who practice the profession are called dubbing artists or microphone players.

Something that has a voice is not voiced, it is spoken again.

The character already has a voice in the movie. What are you voicing? See; Voice-over, giving voice to something that has no voice. Coloring is coloring something that has no color. The person who knows the origins of the words well should use words such as voice-over and dubbing in the right places. 'Oh, sir, that's what it was called, so we use it this way', this is purely fanaticism.

Even from another point of view, voice-over; The name that comes from the act of giving a voice is perpetrator and is Turkish. Dubbing is the equivalent of the French word 'doublage' adapted into Turkish. Then, if the voiceover name is perpetrator, 'voice actor' is not a correct usage in any case.

Recently, I hosted two very valuable dubbing artists in the studio. Indeed, two extremely successful artists in their work. We talked about dubbing and it was a useful conversation. In this conversation, I came across a usage that sounded wrong to me and was the first time I heard it. It's the first time I've heard it said, 'The voice of an actor in a movie is a voiceover'. When one thinks through a logical filter, the question arises of how you can voice a character with a voice. Of course, my purpose is not to criticize, but only to detect. This idiom I heard in this conversation could not pass through my logic. My aim is to increase the correct uses instead of these wrong uses by exchanging with experienced people who know the industry. I should also say that there are very valuable notes that I took from the conversation. Thank you so much.

Sir, the words hasıl-ı kalam, dubbing and dubbing are technical nouns. The only thing they have in common is that they both use microphones. In terms of action, they are completely separate jobs. From time to time, I see these misuses clearly in the applications that come to the agency I manage. There are even those who say, 'I came for a stunt' during the application. I bid you farewell with this beautiful application, and we hope to be together again next week with a different article. Good bye.

Undoubtedly, mass media, which is an indispensable part of our lives, was first used by radio and television. daha fazla oku 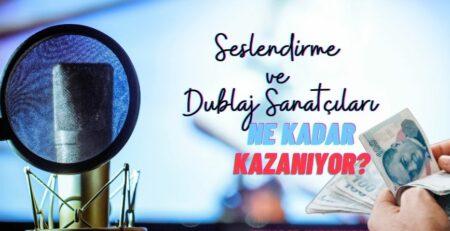